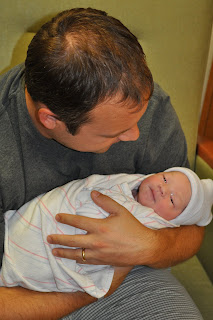 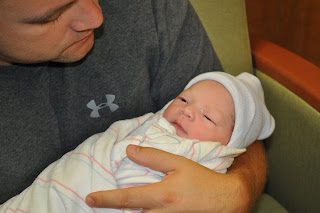 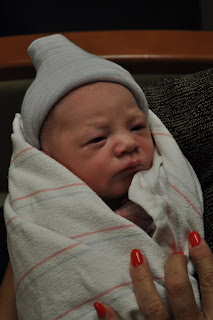 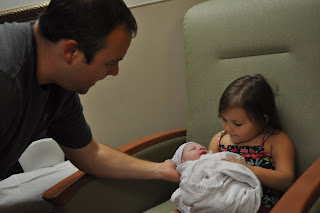 Apparently Hattie was not being stubborn she was just being punctual!  I was scheduled to be induced on my due date.  The morning of August 16th Bret and I woke up to head to the hospital.  We had to be there at 6:30 and were running a little early so knowing it would be a long day Bret wanted to go grab some breakfast for himself.  On the way to get breakfast I started having contractions but did not really say anything to him.  Once we got to the hospital and all set up my contractions were already very regular and getting strong.  The doctor ended up having to go to a surgery so just said to get an epidural and get comfy.  I got my epidural and they checked me I was at 5 cm.  The doctor came back after his surgery to break my water but it had already broken.  At that point I was at 7 cm.  He kept watching Hattie's monitor and said he did not like what he was seeing.  He said "I think the cord might be wrapped around her.  If that is the case I may not be able to be patient when you start pushing.  I might have to help you/pull her out."  Then he looked at the monitor again and said but maybe it is not, maybe she is trying to trick me.  He told the nurse to give me a whiff of pitocin.  Well she gave me just a whiff but I quickly started feeling nauseous and Bret handed me a bucket and left the room.  He can handle seeing all of the other stuff but the second I mention throwing up he was out the door.  He came back with the nurse and she checked me thinking I was nauseous for a reason and she said well there you go you are a 10.  The doctor had left the hospital to go see a few patients.  The nurses had me start pushing while he was on his way but then quickly had me stop because they said a few more pushes and Hattie would be here.  The doctor came in and I pushed only 4 or 5 times and Hattie was here.  Right before she came out he was telling Bret where to stand and what he was going to do to cut the cord.  Well those plans quickly changed because right when she was coming out the doctor said "Just what I thought the cord is wrapped around her neck."  He quickly got it cut and we are so thankful it did not take me long to push her out and that she was okay.  This recovery was so much better than with Molly so we got to come home the next day.  We are adjusting to having two kids and no/little sleep :).  We are so thankful and grateful for our precious Hattie.  More pictures to come soon.  Molly just loves Hattie and can't stay away from her.
Posted by

I'm so excited to see y'all tomorrow and hear all the details!! I'm going to bring dinner, but it won't be fresh or even cooked.... But I'm bringing it!!! :)

She's just as beautiful as her big sister and momma. Congratulations you guys!

Congrats Lisa! Hattie Jane is precious and it looks like Molly is going to be a big help!! Can't wait to see more pictures!

She's cute!!! So happy for the William's family!

She's cute! So happy for the William's family!

Welcome to the world sweet Hattie Jane!!! I can't wait to meet you and cuddle you!!! Congrats to mommy, daddy and big sister! Love you guys!!!

Congratulations! How scary with the cord!! So thankful she was ready and came quickly with no problems! She is PRECIOUS!