For the time being Molly is petrified of bugs, spiders, or anything that may resemble a bug of some sort.  I do not mind her caution for them.  Last summer she came screaming out of her play house yelling bug.  I took a look and it was a yellow jacket that had made a nest in there so yes some caution is nice but sometimes her concern for these things can be quiet much.  For instance this little spider.  It was on the outside and Molly saw it when she was looking through the window.  She went into panic mode and was telling me that spider was going to get her.  I had to show her that it was not going to get her through the glass and it was not going to get her period.  She moved away from the window and played but kept an eye on it till she could no longer see it.  Another time it was just Molly and me in the car and she starts screaming like something was attacking her.  I almost wrecked because it scared me and I was trying to get somewhere so I could pull over.  She was crying and so hysterical I could not understand what she was saying when I would ask what was wrong that I was kind of worried that maybe something did sting her. I finally get pulled over all to find out it was just a, wait for it.................... piece of    FUZZ    that she thought was a bug crawling on her pants.  Now that is a little much. 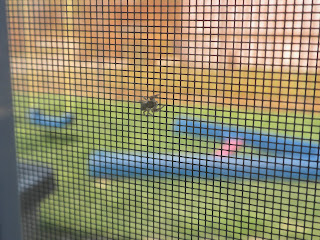 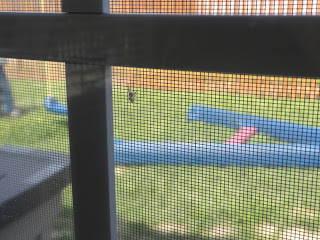 Oh my goodness this is hilarious!! I'm sure it wasn't too funny at the time but it will be something you can look back and laugh at in the future :).