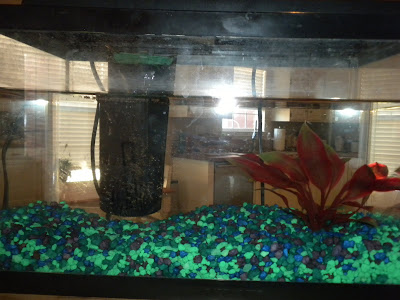 That's right Ruby the fish is with us no longer.  Molly was in bed when Bret and I noticed that Ruby was doing everything she/he could from going belly up so Bret just went ahead and flushed it.  It took Molly a couple of days to even notice that the fish was not in the aquarium.  When she did came the following questions:

Molly was always so worried that Ruby was going to jump out of the top when you opened the lid to feed her so she was just certain that was what happened.  When we told her that Ruby got sick and died she just said "okay."  If you ask her what happened to Ruby the fish she will even say "oh she got sick and died."  Glad she was not that attached!
Posted by

Oh my, well I'm glad she wasn't too attached to Ruby. Now the question is when will she ask for a new one :).

That is pretty funny!